skip to main | skip to sidebar

Cold, sunny and beautiful days! Never thought I'd say 30 degrees feels warm, but yesterday & today's highs in the 30's felt great even though it was only 9 degrees early Saturday morning. Having my young friend, Erin stay with me for several days was such a blessing for me and my puppies. After staying home for 2 days during the coldest days, Erin & I ventured out yesterday for lunch at a new hamburger place and then shopped for hours looking for snow boots for Erin to take back to Russia.

I've visited with the hubs 2 - 3 times a day on Skype. He's doing okay, but is very tired and therefore he's a bit grumpy. The work days start late there and meals are much later. He's an early morning guy and needs to eat on a regular schedule and go to bed early. The 9pm dinners and going to bed after midnight is taking a toll on him. This morning when he called me on Skype he had a nice surprise - he'd purchased a camera that he has connected to his older laptop, so I can see him when we visit. He's been able to see me because I have a newer iMac with a built-in camera; now it's nice to see his face when we visit.  ;=)

Today's worship was great! I missed having hubs with me though. The strange customs and personal rules and regulations where he is are wearing on him. I pray that the Lord will give him supernatural wisdom concerning all the meetings that he's having and that he'll have boldness to speak freely with his superiors regarding his concerns.


This afternoon after church was my niece's 10th birthday party. She's growing up so fast!

So back at home, the puppies and I are snuggled in watching a Hallmark movie waiting on hubs to call when he wakes up.  I'm praying for his rest to get caught up and that he'll be in a better mood.

"...Tell to the coming generation the glorious deeds of the LORD, and his might, and the wonders that he has done....that the generation to come might know, even the children yet to be born, that they may arise and tell them to their children."
~Psalm 78:4-6 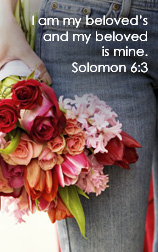 This scripture is written in Hebrew on my husband's wedding ring that I gave him for our 25th Anniversary.

The most romantic place I have ever visited... 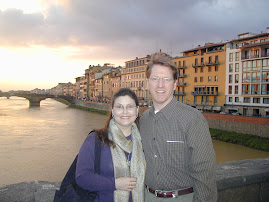 The Ponte Vecchio Bridge in Florence, Italy at sunset on our 25th Anniversary!

Susan
Dallas, Texas, United States
What is a Nona? Well, this Nona is a 48 year old follower of Jesus Christ and daughter of the King because He is my Lord and Savior. Who is this Nona to the people around me? This Nona has been married to a wonderful man; we have been blessed with 29 years of solid marriage (solid ground is formed with worn bumps & cracks, which in turn molds the ground even more solid). I’m also mother to 2 young adult sons, a daughter-in-love, a soon-to-be 2nd daughter-in-love, and Nona to a precious granddaughter. In my blog she's called “P” because she is a precious gift from God who was born in September of 2006. I am called Aunt Susan to many nieces, nephews and God-children. Some dear Russian orphans call me Suezune and my friends and family just call me Susan. What do I do as a Nona? I can't explain it in a couple of sentences, but it takes all day long every day and I pray that I'm doing it well enough to bring glory and honor to my Lord.